The Elephant Spain, knew he would die in Botswana. The hunting was organized by Princess Corinna Zu Sayn-Wittgnstein in honour of King Juan Carlos I. Those would be his last days, this was a dead foretold, it would be the end of its existence. In his Testament tell how he would be killed and the distribution of her property in your heirs. The Princess on a delicate gesture she has seen fit to give it to Troy Catalonia instead of giving the exclusive in HOLA Magazine.

Testament: I am the Elephant Spain Leader of the Herd. I Bequeath to my Heirs:

To my Heir the King of Spain Juan Carlos I. The appropiate, oversize  part of my own anatomy, my Enormous Genitals, so that he will give them suitable use...My Tail, cuts the Hunter, it is a symbol of possesion. The King has very good style: shoot straight for shooting down to a very short distance, less than 30 meters without a sight telescopic, very well placed the shot. So that the elephant will not load on him and crush. He shoot a 470 Nitro Express (Luxury brand worth 4 millions...).

To my Heiress the Princess Corinna Zu Sayn-Wittgentein, my Fangs. The elephant interprete the wishes of the King. So that she will put the fangs in , in arch in the entrance hall of her home in Monaco, with the Inscription:
King Juan Carlos I ( 1938...), hunted the Elephant Spain, 80 pounds. Botswana 2013.(Note.. haunting), the Eslephant is mesuared by the weight of his fangs in pounds).

To my Heir the Prime Minister of Spain Mariano Rajoy my Hypothalamus-Pituitary, gland secretes the hormone testosterone needed to stimulate the gonads. He need it.

Rajoy have to study to Lincoln: 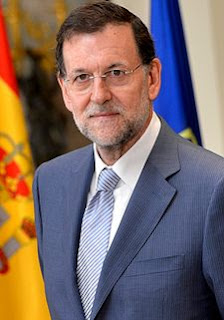 On April 15, 1861. Lincoln declared insurgents to Southern States, stating that the use of force to reinstate the Union was lawfull. And to prove that statement was not made by empty word, raised a levy of 75.000 men ready to restore the Union. The Civil War had begun.

Rajoy has to ride on the shoulders of giants:

George Washington: in 1776 divided the thirteen colonies in twenty three states. Abraham Lincoln: in 1861 divided the State of Virginia in two states, Virginia and West Virginia..

Mariano Rajoy President of Government of Spain: from 2011 to 2015, has to divide The Region of Catalonia in Two Regions. West Catalonia: Tarragona, Lérida, East Catalonia: Barcelona, Gerona Only the Spanish Oficial Language.

To my Heiress the Former President of the Government of Madrid Esperanza Aguirre my Knees, so that she can imitate my genuflections. .. My Tongue, no one can make better use..


To my Heir, the Secretary general of the PSOE, Alfredo Perez Rubalcaba my ears, so that he can hear  everyone´s doing......

To my Heir, the President of the Government of Aragon, Luisa Fernanda Rudi my hippocampus, so that. nobody can make better use of memory. As Mnemsme Greek goddess, mother of the nine muses, you have to remember and learn to distinguish between friend and foe, the essence of what is important.

In a Nutshell: the language and culture with Spain, and shared common access road and rail to France from Huesca. The major hazards are: Catalan separatists naivety, your neighbors, the more they receive ... most want, if they received throughout Spain as compesation, would seem little .... The are isatiables traders

!!!Ah, Aragon citizens have to take care of some traitors of Aragon and Spain who speak Lapão. (Language Oriental Part Aragonese: Catalan).


To My heir Iñaqui Urdangarín son-in-law of The King my front legs, so that he has to indicate, strengthen and guide the business trail partners and friends?. Know yourself?.
Has the Royal Family abandoned to Iñaqui? No I do not think so.

To my Heir the King's daughter Princees Cristina my hind legs, so that she show that the hind legs not walked the same paths as the front legs.

The main separatist Catalan, attorney Miguel Roca, explained the riddle. The intimacy of the princess is affected.

To my Heir Miguel Roca lawyer of Princess Cristina my brain, so that he is one of the fathers of the Constitution 1978. He Included the word. Nationalities.

The Monarch has known him for 40 years, and trusted him to defend his daugher, as other ocasions had entrusted Catalonia mediation with separatist tense moments.

To my Heir Former President of the Goverment of Catalonia Jordi Puyol my eyes, so that he scan see the horizon and panoramic views from Its great wall location of Troy Catalonia. My admirable eyes allows him to see around. 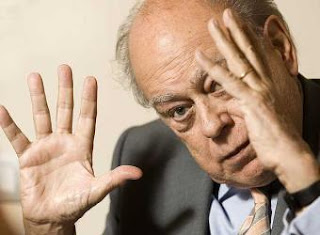 To my Heir, Catalan Group Spokesman in the Spanish Parliament, Josep Antoni Duran i Lleida my trunk. so that his dual nature, to smell the same time, which is cooked in Madrid and Catalonia. The elephant is fed through its trunk.

To my Heir the President of Republican Left of Catalonia Oriol Junqueras my intestines, so that he Knows how to use, and who has to throw or quench in my droppings.

To my heir the President the Catalonia Government, Artur Mas,my digestive track (anus), so that he set the Order Tractal symbolizied in one Barretina and Brazalet, wich will be delivered by Jordi Puyol first time next 11 September, 2014 to more than three million Catalans asking Independence. Jordi Puyol will read the Declaration of Independent of Catalonia.

La Barretina and the Tractal Brazalet, bear on its face and in the center, a painting by Jordi Puyol, surrounded by portraits and photographs of all separatist, traders, smugglers, politicians, heroes, scientist, architects....that Catalonia has had trough out its two thousand years of history, from the year of 27 b.C. the Roman Emperor Augustus came to Hispania to command campaings in Cantabria (Cantabrian Wars). However, due to his poor health he prefered to stay in Tarraco. Actual Tarragona.

On the reverse side, the Swastika Cross. The word "Swastika" was used at least 5,000 years before Adolf Hitler designed the Nazi flag. The word Swastika comes from Sanskrit, meaning "good fortune" or "welfare".

Inflate and will release thousands of Tractales and Barretinas. It is marketed as treats for children and adults.

To my Heir to the Minister of Economy and Knowledge of Catalonia, Andreu Mas-Colell, my jaws, so he can more easily devour all Catalan government revenues and the future Republic of Catalonia.

My admiration for the Four powers of Catalonia: The Caixa, Montserrat, La Vanguardia and Upper Bourgeoisie Catalans now represented by Miguel Roca, by its ability to adapt to the times, with General Franco more franquist that Franco. With the King, Independents and friends of the King.

Institutional Support to the Abbot Soler.

Wesdnesday, Marzo 8, 2013. La Vanguardia, páge 29. Photography half page . The Abbot Surounded and lionized by the past four Presidents of the Government: Pujol, Maragall, Montilla y Mas.

Josep Maria Soler, Abbot of Montserrat, the Monastery that represents the spirit of open and exclusive Catalan. Or the far-reaching Catalans.....


Artur Mas reward to Sistach with the Gold Medal of the Government of Catalonia.Cardinal Sistach has banned in Castilian, you can only say in Catalan.

The Obituary of my death to full in La Vanguardia. It costs  18.000 euros. I Suggest you have the honor of paying Fomento de Construcciones y Contratas, S.A.

On the year of 27 B.C. that the Romam Emperor Augustus came to Hispania to command campaings in Cantabria (Cantabrian Wars). However, due to his poor health he preferred to stay in Tarraco. Current Tarragona.

14/04/2012 - Spain's King Juan Carlos, 74, underwent surgery after an accident while... that the monarch had been on a trip to hunt elephants in Botswana, ...
5. Spanish King Juan Carlos Elephant-Hunting Trip Causes Outrage ...
www.huffingtonpost.com/.../spanish-king-elephant-...‎

18/04/2012 - King Juan Carlos I has apologized to the Spanish people for going on a secret trip to Africa while his country faces an economic crisis.
8. Spanish King Juan Carlos under fire over costly Botswana elephant ...
www.globalpost.com › ... › Regions › Europe › Spain‎

16/04/2012 - KING Juan Carlos has become the target of Spanish outrage after going on a $24000 elephant-hunting trip, having recently said that he was ...
11. Juan Carlos I Seeks Redemption, for Spain and Monarchy ...
www.nytimes.com/.../juan-carlos-i-seeks-redemption...‎

24/03/2013 - King Juan Carlos leaves hospital earlier this month. .... It emerged in the Spanish press that Princess Corinna had frequently accompanied him ...
3. Juan Carlos I Seeks Redemption, for Spain and Monarchy ...
www.nytimes.com/.../juan-carlos-i-seeks-redemption...‎

Alfredo Pérez Rubalcaba is a Spanish politician who is Secretary General of the Spanish Socialist Workers' Party (PSOE) and leader of the opposition in the ...
1. Luisa Fernanda Rudi Ubeda - Wikipedia, the free encyclopedia
https://en.wikipedia.org/wiki/Luisa_Fernanda_Rudi_Ubeda‎

Josep Antoni Duran i Lleida (born March 27, 1952 in Alcampell, Huesca) is a Spanish politician. A qualified lawyer, Duran began his political career when he ...
Oriol Junqueras i Vies - Wikipedia, the free encyclopedia
en.wikipedia.org/wiki/Oriol_Junqueras_i_Vies‎

Oriol Junqueras i Vies is a Catalan historian and politician. He is the current mayor of Sant Vicenç dels Horts and has been the president of the Republican Left ..
1. Artur Mas i Gavarró - Wikipedia, the free encyclopedia
en.wikipedia.org/wiki/Artur_Mas_i_Gavarró‎

Artur Mas i Gavarró (Catalan pronunciation: [ərˈtur ˈmaz i ɣəβəˈro]; ... his degree from the University of Barcelona, and is fluent in English and French, ...
1. Barretina - Wikipedia, the free encyclopedia
en.wikipedia.org/wiki/Barretina
A barretina (Catalan pronunciation: [bərəˈtinə], Western Catalan: [bareˈtinɛ]; plural:barretines, diminutive of barret "cap") is a traditional hat that was frequently .
2. Imágenes de barretina catalana in english
- Informar sobre las imágenes

Andreu Mas-Colell is a Spanish Catalan economist, an expert in microeconomics and one of the world's leading mathematical economists. He is the founder of ...