Catalans and Basques. France and Spain

The Catalans and Basques are in Southern France and Northern Spain. In France there are no problems with Catalan or Basque and Spain. Yes. Why?:

The Location of Catalan and Spanish Basques is optimal to exert pressure on Spain because:

Catalonia and the Basque Country are the only two routes of access (Railway and Highway) to France, and therefore to Europe. The North, 80 miles, to the Biarritz, Toulouse and Narbonne,
Highway are impassable for ecological reasons. A decision of France.


REGIONS OF france: THE french SOLUTION

Catalans in France. Department of East - Pyrénées. Integrated in the Region of Languedoc-Roussillon,

The Basque Country in France. Department of Atlantic-Pyrénées. Integrated in the Region of Aquitaine

In 1640 Louis XII annexed the Catalans who lived north of the Pyrenees, where Montpellier cities as significant as the birthplace of James I the Conqueror and Perpignan was the capital city of the Kingdom of Majorca. Later, in 1700 Louis XIV imposed the French Language and joined the French State. His grandson Philip V did the same in Spain.

France. There are 27 Regions.  22 are in France. similar to the Spanish Community, 5 are abroad.  and 101 Departments, similar to the Spanish provinces.
The Departments were created by decree on December 22, 1789 adopted by the Constituent Assembly to replace the Provinces of France, considered contrary to the homogeneity of the nation. Their exact numbers is (83) and there are  limits were established on February 26, 1790, and its existence came intu effect on March 4, 1790. Afterwards they have underwent several changes until the current 101 Departments.

Mayotte Island was the last to become an foreign Department from March 2011.

In France, several Candidates can Stand  for elections for the Presidential Election. If nobody has more than 50 % of votes. The two most voted have to go back for second elections. The election of the members of  Parliament are decided in 577 electoral districts at the rate of one member of Parliament per constituency 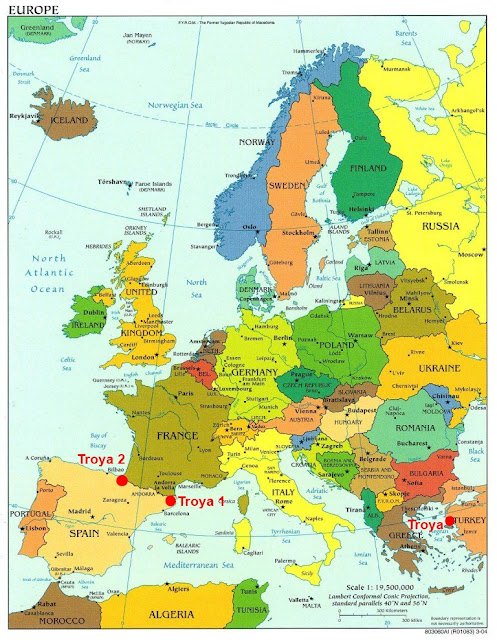 In France there are no problems with Catalans or Basques and Spain. Yes. Why?

The History of France and Spain, like the history of Europe has been hectic and storming since the year 1640 until today.
Stories, Lies and Myths are expressed  at the end of these page. See Links. 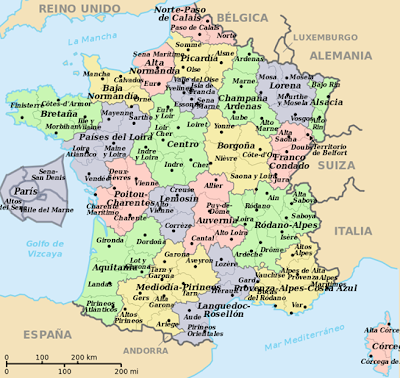 THE REGIONS AND DEPARTMENTS OF METROPOLITAN FRANCE: THE FRENCH SOLUTION

The French Catalans are integrated in the Region Languedoc-Roussillon. East-Pyrénées Department

In The French Basque Region Aquitaine. The Department in the Western Pyrenees

Normandy. The Normans or Norsemen, [now Norway and Denmark] settled in this region in the year 1066  when they invaded England, founded a dynasty and filled England withNorman Castles, including Windsor and the Tower of London.

In 1956 Normandy was divided into two regions  Low Normandy and High-Normandy. As can be seen on this map of France.

For centuries Aquitaine. belonged to the King of England. In the Twelfth Century. Eleanor of Aquitaine, Duchess of Aquitaine, married Henry II King of England and Duke of Anjou, which gave rise to the hundred  year war which shall be continued Fifteenth Century, enabling the English to conquer Paris. Joan of Arc the Maid of Orleans helped to boost the morale of the French, and, the artillery was used properly by  Louis XII, the King of France. It was used for the first time against the Castles.

The Kings of England during this period were the Dukes of Normandy, Anjou and Aquitaine, and theoretically should have bowed to the King of France. But they did not.

These and other regions of France are as important as Catalonia and the Basque Country but they do not close the route of access to France and Europe.These Spanish Regions, Catalonia and the Basque Country, authentic Troy1 and Troy2, they are going more and more in this direction due to there geographical position and the corruption and social policy in Madrid and the rest of Spain. As all the Communities and their respective leaders would like to be the same as Catalonia, which is impossible, as they do not have privileged geographical position in the Iberian Peninsula, and such an important regional language like Catalan, which imposes it language  on their region and those who live there.

﻿
"When in Spain we speak of reconciliation and consensus , there is certanly a booty to share" . José Ortega y Gasset

And what a booty! Invent the rule of autonomy to divide Spain and carve it up as spoils . Institutionalize corruption, the pitch and the covenant with predatory financial elites and monopolists who , along with nepotism and incompetence , is their main identity .

Fhoto. Spanish philosopher and essayist, a leading exponent of the theory of perspectivism and vital reason ( ratiovitalism ) and historically situated in the Novecentismo movement .

Torcuato Fernández- Miranda and Hevia. When he stopped  being President of the Parliament, he did not stand for any party in the 1977 elections.  H.M. King Juan Carlos I distinguished him the title of Duke of Fernandez-Miranda and gave hin the Golden Fleece , the maximun condecoration of knigthood and it was the first title of Knighthood that the King has given during his reign.

His participation as Royal Senator in the debate of the Constitution is as relevant as ignored, and when he disagreed  with Title VIII, the Territorial Organization of Spain in Regions, Communities and Nationalities a message was sent by the group which he had joined which said. << shut up or leave >>. And he left.

Adolfo Suárez had the backing of King Juan Carlos in order to dismiss Fernández-Miranda from the Constitucional Group.

That is  why King Juan Carlos is in charge of the Constitution.

REGIONS, COMMUNITIES AND NATIONALITIES IN SPAIN: THE SPANISH SOLUTION


There are 17 Communities, Regions or Nationalities and two Autonomous Cities. What a Mess!!.

Spain is divided into Regions, Communities or Nations, with different names for each regions, communities or nationalities and their leaders the same. In which there are four official languages ​​and each Region makes it obligatory to speak this language in their Region. 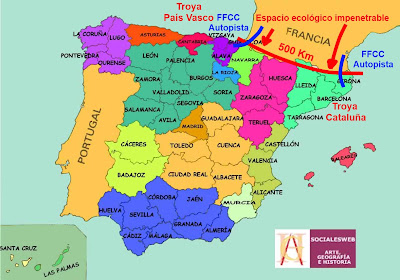 Is Catalonia  a community, a Region, or nationality?, what is it?. For Catalan nationalists is a Nation, for the rest of  Spain it is Spanish.Region.

The Catalan and Basque problem has arisen because of its geographical position. It controls the only
two viable ways routes of access from Spain to France, by Motorway and Railway, with a distance of over 350 Miles between them.

In Spain the Political Parties voted with closed lists and elected, 350 Members of Parliament and 208 Senators. And they have supported leftist Catalan or Basque separatist in the destruction of the Spanish State. The far right or the Catholic Church have  also, in their own interest worked in their own  way. What a Mess!!!

These destructive forces. Catalan and Basque Separatists, the far left or the far right and the Catholic Church have prevented  and prevent democratic normality in Spain. And we need to have a Providential Head of State who will save us from disunity and chaos.

Francisco Franco with an authoritarian regim and King Juan Carlos with a democratic regim have failed to integrated Catalonia and Basque Country in Spain, so that each citizens has the same rights,  being equal to the rest of Spain. We are neither free not equal. What a Mess.

In 1978 the Spanish Constitution in Article 2 defines "The indisoluble unity of the Spanish Nation, the common and indivisible Homeland of all Spaniards". And it also chops Spain into Communities, Regions and Nations with diferent names and vehicular languages,  both in the schools and the Public Administration.

Catalonia could be divided into two Communities. Western Catalonia, (Tarragona, Lérida) and  Eastern Catalonia (Barcelona, Gerona). The Spanish Language Vehicular language in School and Public space. In private every citizen can speak the language they want.

France divided Normandy in two Regions. Lower Normandy and Upper Normandy, of which Caen and Rouen are the Capitals.

United States divided Virginia in two States:  West Virginia, and Virginia, of which Charleston and  Richmond, are the Capitals.

These are some basic ideas. There are many others, such as electoral reform, and fiscal equality, ...

Photo of James I the Conqueror. Louis XII in 1640 annexed most of the Catalans who lived north of the Pyrenees . The significant and important cities of Montpellier , where James was born, and Perpignan was the capital of the Kingdom of Majorca. Later, Louis XIV in 1700 imposed the French language. His grandson Philip V did the same in Spain . 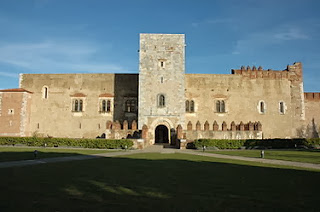 Peter II King of Aragon, Count of Barcelona rejected his Son James, who did not see him until two years after his birth. At this age the king had ​​a marriage of convenience, giving his son James to the tutelage of Simon, Lord of Montfort,in order to marry him to his daughter, Amicia, so James was taken to the Castle of Carcassonne until he was 18 years old .

Roger de Flor ( Brindisi , 1266 - Adrianople , 1305 ) was a warlord, a mercenary in the service Crown of Aragon. He served as one of the Captains of the Almogavares and was also known as Roger von Blume and Rutger von Blume. 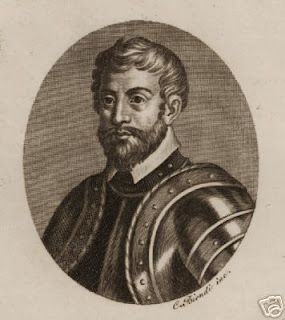 An engraving.of Roger de Flor in the nineteenth century. A Statue in honor of Rafael Casanova in the city of Barcelona


﻿Juan Bautista Basset y Ramos was part of the Anglo- Dutch fleet which sent the Austrian suitor to take over as king of Spain in1704. During the war between Great Britain and Austria againts Spain and France.

After the capture of Gibraltar , Allied troops landed in Denia on August 17, 1705 . There, General Basset collaborated  in the conquest of Valencia, where the Archduke Charles of Austria was proclaimed King as Charles VI.

On January 15, 1728, Basset died, a few months after being released from the Prisson in a deplorable condition, being buried by charity by the Jesuits . On his deathbed he received a comunication from the Emperor Charles VI about his promotion to Leutnant Feldmarschall - imperial army. 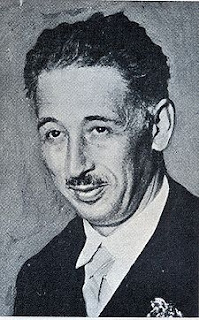 Separatists in XX and XXI century in Catalonia

This group of Separatists know that in this battle there are two predestined groups:

One is destined to win in every case. These are the separatists if they win it is because they have won, and, if they losse, they are Catalan patriots who can practice victimhood.

Another to predestinated to lose in every case. The Rest of Spain loses


Clearly Juan Antonio Samaranch Torello, the 7th President of the International Olympic Committee , July 16, 1980 - July 16, 2002 author of the Olympics Games in Barcelona in 1982, is a leading figure in the history of Catalonia . Because of  his political past That is why the separatists dislike him.


On the death of General Franco, Samaranch declared in 1975: "I consider the figure and work of the Caudillo will remain in history as one of the most important heads of state of the twentieth century . His leadership in Spain for 39 years has meant prosperity and peace and lasting longer than our country has known for centuries "In 1975 , Samaranch created a party called Concordia Catalan.

Vidal-Quadras requested the intervention of the Guardia Civil in Catalonia - Ecodiario.es
ecodiario.eleconomista.es

Elections in France: the rules of the game | International Perspectives of

Palace of the Kings of Majorca - Wikipedia, the free encyclopedia es.wikipedia .org / wiki / Palacio_de_los_Reyes_de_Mallorca This building marks the golden age of Roussillon and especially Perpignan, when this city was the capital of the Kingdom of Mallorca. It was from August 21

... Location - Architecture - History -The Palace after the Treaty of Roger de Flor - Wikipedia, the free encyclopediaes.wikipedia.org / wiki / Roger_de_Flor Roger de Flor (1266, Brindisi - 1305, Adrianople) was a Knight Templar and mercenary leader serving the Crown of Aragon. He served as one of the ...

Els Reapers - Wikipedia, the free encyclopedia es.wikipedia.org / wiki / Els_Segadors Els Reapers ("The Harvesters" in Castilian) is the official anthem of the autonomous community of Catalonia. The current letter is dating Emili ... Guanyavents and

Digital History - The War of 100 years
www.historicodigital.com/la-guerra-de-los-100-anos.html
In France the war was justified as punishment for the English for not paying ...She started using light cavalry, which was used in the ... The type of warfare was changing, and the emergence of the artillery began to be a ... Around the twelfth century began to emerge manuals military teachings ...